So, life is good.

For four weeks, we vacationed on the island of Mauritius (or in French, Ils Maurice). 2400 kilometers (or 1500 miles) off the east coast of South Africa, 20 degrees below the equator, 3 degrees above the tropic of Capricorn (which is the most southerly point at which the sun is directly overhead, happening in December and called the winter solstice…Don and I have been doing some homework!). And in the middle of the Indian Ocean. Wow.

This was a vacation inspired by our good friends, Caline de Gasquet and Jean Jacques Armand, who, leaving Provence eight years in a row (in the coldest part of winter in Provence, January and February) to enjoy the hot summer on an island in the lower hemisphere; they peaked our curiosity. So, after their eighth time, we decided to join them.

First a little history from Google: (Because if you are like me, I had never heard of the place before coming here.)

“The people of Mauritius was first discovered by the Arabs as early as in the 10th century, but officially explored by the Portuguese in the 16th century and subsequently settled by the Dutch in the 17th century. The Dutch were the ones who named the island in honor of Prince Maurits van NASSAU.

Mauritius was occupied successively by the Dutch (1598-1712) and later by the French (1715-1810). The French assumed control in 1715, developing the island into an important naval base overseeing the Indian Ocean trade, and establishing a plantation economy of sugar cane. The British captured the island in 1810, during the Napoleonic Wars through the Treaty of Paris. Mauritius remained a strategically important British naval base, and, later on, as an air station playing an important role during World War II for anti-submarine and convoy operations, as well as the collection of signals intelligence. On 12 March 1968, Mauritius became an Independent nation.”

The people there, soft and beautiful, are so very friendly and kind. Speaking perfect English, their native tongue is French, with a bit of creole mixed in. (I imagine we were the only Americans here enjoying their English and reveling in their paradise.)

In front of our hotel there were white beaches, and water the color of the most intense viridian green (in the shallows), I think I have ever seen. Then, as it gets deeper, it becomes true ultramarine blue. (An artist assessment.) Out several hundred yards, there is a coral reef creating what they call the Blue Lagoon, or Blue Bay… a perfectly protected calm lagoon for swimming, surfing, paddling, boating and, best of all, snorkeling.

From a volcano that erupted eons ago, all the coast line (and the island, for that matter) is sprinkled with volcano rock, black as pitch, creating a huge contrast. Privacy walls, large homes with their thatched roofs, sea walls; the islanders have put it to good use.

But the best part is what is below the surface of the water: an abundance of the most beautiful small fish swimming amidst corals (the size of a basketball and sometimes the size of two cars): fish as small as a fingernail, most the size of the back of your hand, navy blue and white stripe, sandy brown with yellow orange eye lids, hundreds of pale electric blue tiny ones always together in a drift, brilliant yellow and black weird shaped ones, white ones with a black spot the size of your finger nail on the beginning of their fin, some as thin as a ribbon, none bigger than your forearm… not yet anyway. Red and white striped ones, olive green beauties with cobalt blue spots and a mouth protruding like it wants to kiss.

It was like standing in front of one of those huge glass walls at the Atlanta Zoo, except you are swimming with them! And they treat you as if you are invisible. But if you slowly extend your hand and leave it there floating, they will swim closer out of curiosity and then dart back at the last moment. Some even dare to touch, then turn abruptly in reverse. Amazing. I was bewitched. I could spend hours swimming with them. And did. But to paint here is a gift. Too much to paint and not enough time. 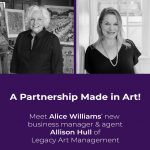 A Partnership Made in Art 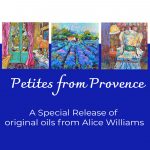 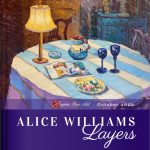 for a glimpse inside the mind of Alice Williams

I won't spam you. Promise!

Copyright Advisement: Alice Williams always retains full copyright © of her artwork. The sale of any pieces does not transfer any copyright © to the buyer. Reproduction is strictly prohibited in any form without written consent of Alice Williams.

We respect your privacy.
We never sell or disclose your personal information
for any reason.

Thank you for subscribing!